Acting Through Song - Techniques and Exercises for Musical-Theatre Actors 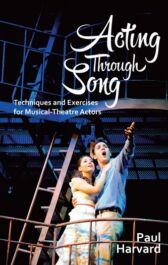 "Musical theatre has the potential to be extraordinary. As a genre, it brims with possibility. Often dismissed as a frivolous style of entertainment, the musical can actually be the most powerful and affecting of theatrical forms"

But he quickly diagnoses a problem with much of the acting he sees in drama schools, where he teaches, and on the professional stage, where he has worked ...

Self-consciousness creeps in, singing and dancing take precedence, so that when performers open their mouths to sing, the acting stops

It takes the techniques of modern actor training including the theories of Stanislavsky, Brecht, Meisner and Laban and applies them to the fundamental component of musical theatre - Singing

With dozens of exercises to put these theories into practice, and numerous examples from a broad range of musicals, the result is a comprehensive and rigorous acting course for those training in musical theatre or already performing, whether amateur or professional, to realise their potential and act better

A unique guide to performance in musical theatre, discovering the deeper meaning, truth and emotional resonance of songs

"The most methodical, thorough and practical book on the subject that I've ever read" ~ Daniel Evans

"For anyone wishing to do justice to a musical-theatre role, and definitely for those wishing to work in this genre, this guide is a must' ~ Teaching Drama Magazine

AND:
Audition Songs for Women