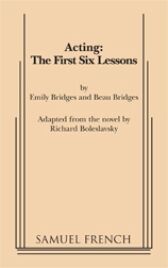 Beau Bridges, winner of three Emmy Awards and two Golden Globes, teams up with his daughter Emily Bridges, a recent college grad, to create this stage version of Richard Boleslavsky's 1933 narrative about a dedicated acting teacher and his pupil

While instructing the young actress in her craft, the Teacher gives the Creature valuable lessons for living as well

Over the course of ten scenes, the action moves from the Teacher's studio to a small theater to a film set to Central park and back, and finally, to a moving denouement atop the Empire State Building in 1936

"[This show] should be seen twice, once to enjoy the story and again to learn the lessons that work equally well in life as on stage ... Rare and Wonderful!" ~ Examiner.com

"Enthralling and edifying hour and a half of theater ... a big, big hit!" ~ Stage Scene LA