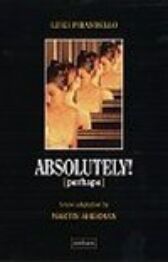 No one has ever seen Signor Ponza's wife and her mother Signora Frola together. Also, the neighbours have become suspicious because Signora Ponza never leaves her home and so they start asking questions ...

Ponza claims that his wife is really his second wife, the first having died in an earthquake that destroyed all records

Meanwhile, his wife only pretends to be Signora Frola's daughter to humour Signora Frola, who, he claims, is insane

Thoroughly bewildered, Agazzi demands to meet Ponza's wife, who arrives heavily veiled, proclaiming herself as both the daughter of Signora Frola and the second wife of Signor Ponza

Absolutely Perhaps is a brilliant comedy on the elusive nature of identity and reality, and, like all of Pirandello'a work, shows truth as subjective and relative and drama itself a mystery