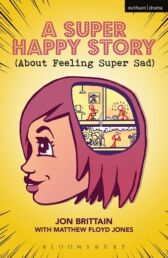 A fun, silly and sad show for anyone whose brain isn't always on their side

But she's got an illness

It makes her feel like she isn't the person she wants to be ....

But she doesn't want anyone to know about it

"A mix of wit and low key emotion that suddenly grips you by your heart" ~ Lyn Gardner, Guardian

"There's a quick, dry comedy to Brittain's script, which puts over information - including the science behind depression - without overloading with facts" ~ Hull Daily Mail

★★★★★ "This is a must see for anyone that has felt the effects of depression, but as a society still battling with the right way to deal with mental illness, everyone could benefit from seeing this super story ~ WhatsOnStage.com

★★★★★ "This is a beautifully developed, deeply moving exploration of depression dressed up as a musical" ~ British Theatre Guide