A Life in the Theatre 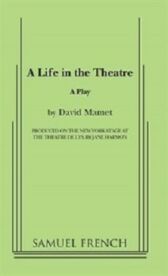 Two actors are seen performing, rehearsing, discussing and arguing over their work

In a series of snippets of plays running the gamut from melodrama to pseudo Chekhov to sheer corn, the two portray the reality as well as the illusion of acting and the theatre.

The older actor, Robert, is a seasoned professional. John, the younger one, is an eager to learn novice

"The warmest and often the funniest play in town" ~ N.Y. Post