A Letter of Resignation 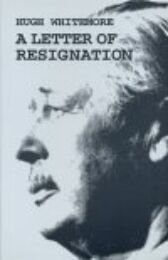 Britain was becoming a different place and to many people the Prime Minister, Harold Macmillan, seemed outdated and irrelevant - an Edwardian grandee lingering uncomfortably in the world of E-type Jaguars, Carnaby Street and 'That Was The Week That Was'

But few were aware that his life was scarred by domestic unhappiness and sexual betrayal. A Letter of Resignation explores the events that lay hidden behind the headlines and examines a complex web of personal and political morality

"A Letter of Resignation ... is an intriguing modern history play..." ~ Bill Hagerty, News of the World

"Hugh Whitemore's new play is the kind the West End has almost given up on: engrossingly serious, nimbly entertaining, elegantly written, expertly constructed, wise, thoughtful and hard as nails. Good Lord, not a traditional well-made play? Actually, yes, as near as; and that is where Whitemore's masterly irony lies..." ~ John Peter, Sunday Times

"There's a long flashback to the day when Dorothy Macmillan first told her husband about her relationship with Robert Boothby - a scene I was dreading which turns out to be a triumph, written with a sureness of touch that Rattigan would have been proud of..." ~ John Gross, Sunday Telegraph

"...one of the most quietly absorbing, intelligent and - finally - moving plays of the year" ~ Robert Butler, Independent on Sunday