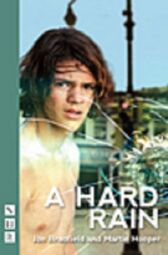 Kicked out of the military after a year in Vietnam, Ruby rocks up in Greenwich Village in high heels and a mighty rage

And then meets the street kid who will change his world

Although the play features fourteen very diverse characters, it can be played by a Cast of two to six actors (M4,F2)

A Hard Rain premiered at Above the Stag Theatre, London, in 2014