A Handful of Stars 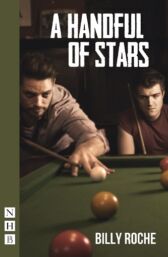 In the sleepy Irish town of Wexford, where shotgun weddings are outnumbered only by random acts of violence, the pool hall is Jimmy's only sanctuary

But will such a place embrace his bright ambition, or bring it down, burning, to the ground?

" ... simultaneously mean and warm, stifling and nourishing, comic and sad" ~ The Times

A Handful of Stars was first performed in 1988 at the Bush Theatre, where it won the John Whiting Award and the Plays and Players Award for Best New Play

This edition was published alongside the play's first professional stand-alone revival at Theatre503, London, April, 2014

Also available in The Wexford Trilogy