A Girl With a Book and Other Plays 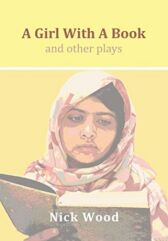 Topical and wide-ranging, they concern refugees, friendship, loss and courage.

In 2012, gunmen stopped a bus in Pakistan and shot three young girls

Their crime was wanting to go to school

Achieving international acclaim after its opening in Hamburg, the play examines Malala's story through a series of questions, including whether a "middle-aged, middle-class white man" could ever understand the world of a young Pakistani girl

Using quotes from Malala, the two other girls involved in the shooting and Malala's father, the writer's journey attempts to piece together the story and come to an understanding of the issues surrounding it

He speaks to members of different communities, his own wife and even imagines speaking to Malala herself

During the process Wood remains grounded in his stance as an outsider looking in, picking at the hypocrisy of how we can criticise the oppression of women in one culture but not another as he struggles with his own prejudice and privilege

On an ancient fortress, two boys swear a pact of friendship

Eddie and Tim create their own den up on the Knoll, a secret place for heroes

The only problem is, winter is setting in and Eddie won't come down

As the snow falls, Tim must decide whether to take food to Eddie or betray him by telling the grown ups where he is

Bird Boy is a play about transitions from childhood to adolescence, from loner to friend.

Of Roma background, Mia is a refugee who has lost her home, and most of her family

She has odd bits and pieces in her bag, which have stories attached to them

Mia has received a postcard of this town from her sister, Sofia, who has disappeared

She tells them about Sofia, shows them a photograph

And reveals her fears

A Dream of White Horses

Paul's father, Rick, was a professional climber who fell to his death climbing a cliff in Wales

To climb the same cliff