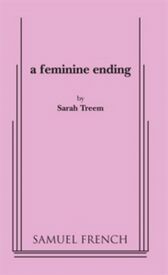 Amanda, twenty-five, wants to be a great composer

But at the moment, she's living in New York City and writing advertising jingles to pay the rent while her fiancé, Jack, pursues his singing career

So when Amanda's mother, Kim, calls one evening from New Hampshire and asks for her help with something she can't discuss over the phone, Amanda is only too happy to leave New York

They spend the night together in an apple orchard, where Amanda tries to tell Billy how her life got sidetracked

Neither does Amanda's mother

Or, for that matter, her father

A Feminine Ending is a gentle, bitter-sweet comedy about a girl who knows what she wants but not quite how to get it

" ... has a sense of humor that brings to mind a budding Wendy Wasserstein and a liberated sense of form that evokes a junior Paula Vogel" ~ Los Angeles Times