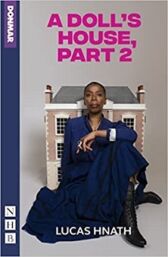 Fifteen years after Nora Helmer slammed the door on her stifling marriage, leaving her family behind, she's back with an urgent request

Lucas Hnath's funny, probing and bold play is both a continuation of Ibsen's complex exploration of traditional gender roles, and a sharp contemporary take on the struggles inherent in all human relationships across time

A Doll's House, Part 2 premiered at South Coast Repertory, California, in 2017, and transferred to Broadway later that year

It receives its UK premiere at the Donmar Warehouse, London

"Smart, funny and utterly engrossing … This unexpectedly rich sequel reminds us that houses tremble and sometimes fall when doors slam, and that there are living people within, who may be wounded or lost … Mr. Hnath has a deft hand for combining incongruous elements to illuminating ends" ~ Ben Brantley - New York Times

"Hnath's play is less a conventional sequel than a thought experiment inspired by the original. Luckily, Hnath is no mean thinker ... Provocatively, the play functions as both homage and riposte, casting a critical eye on Nora's choices and trying to wrestle with their consequences ... Hnath writes fast, vibrant dialogue – much of it in a salty, modern vernacular" ~ Guardian

"Provocative, funny and, ultimately, generous ... A Doll's House, Part 2 demonstrates just how imposing is that big doorway Nora walked through once upon a time, and the guts it takes to keep walking through it, again and again" ~ Washington Post

"Razor-sharp and frequently hilarious" ~ Time Out