A Director's Guide to the Art of Stand-up 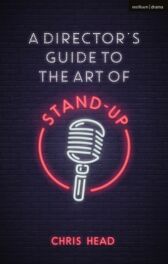 "It opened up a world that I didn't know before and haven't stopped exploring since. I hope this book does something similar for you" ~ Will Gompertz

Yet behind the scenes, you will increasingly find the shadowy figure of a director

For comics themselves and for those who support them, this is the first book to give the director's perspective on creating and performing stand-up comedy

Drawing on his own experience of directing stand-up alongside speaking to comedians and their directors, Chris Head produces a revealing perspective on the creative process, comic persona, writing stand-up, structuring material and delivering a performance

With a foreword by BBC arts editor Will Gompertz and contributions from many other interviewees including Oliver Double (author of Getting the Joke), this is the only book that goes all the way from one-liners to theatre via comedy club sets and full-length shows

Perfect for stand-ups from newbies to pros, students of comedy, academics studying and teaching stand-up and for directors themselves, A Director's Guide to the Art of Stand-up offers hundreds of inspiring practical insights and shows how creating the comedian's highly personal, individual act can be a deeply collaborative process

1. Directing the Persona: The Comedic Self
2. Where Comic Ideas Come From (And How to Cultivate Them)
3. How Directors & Stand-Ups Work Together