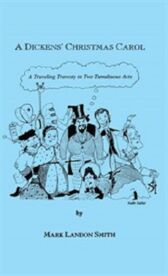 From the bonny shores of England comes the Styckes-Upon-Thump Repertory Theatre Company, a stuffy old travelling troupe embarking on their fifteenth annual farewell tour of the Dickens' tale

Bettina, the company diva, pretends to be ill, certain the production will be cancelled

However, much to her shock and rage, the show does go on without her!

The play begins but mid-way through the theatre doors open and in rushes Bettina, determined to reclaim her roles

Mayhem ensues as this professional company scrambles to keep the show going and everything that could possibly go wrong does, to hilarious, ridiculous results!