A Crime in Rhyme and Other Mysterious Fragments 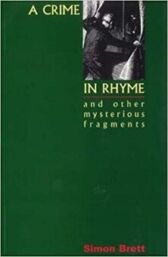 Simon Brett, who brought the world the Charles Paris, Mrs Pargeter and Fethering series, has decided to fill in a few gaps in the world of mystery fiction

During the Golden Age of crime, when murders were decorously perpetrated at country house weekend parties and investigated by impossibly learned aristocratic sleuths, nobody took the trouble to write a whodunnit in verse

Simon Brett remedies that in A Crime in Rhyme

Also, regretting the fact that Jane Austen, T S Eliot and Dylan Thomas never found the time to write crime novels, Simon Brett does the job for them

All that, together with a cancelled draft of Agatha Christie's will and a missing chapter from Charles Dickens' Edwin Drood, makes this book a must for mystery fans - and anyone else who enjoys a good laugh

Copy signed by the author