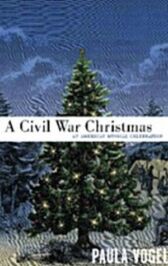 It weaves a tapestry of both fictional and historical characters - such as President and Mrs Lincoln - with holiday music, marches, hymns and spirituals of the period to tell a story of companionship and communal hope arising from one of America's darkest hours

" ... a rich and moving play with music ... it taps into seasonal themes of redemption, forgiveness and community, with a decidedly American bent" ~ Variety