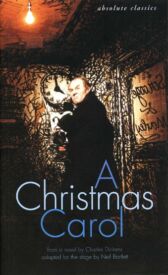 Large Mixed Cast
"Oh, but he was a squeezing, wrenching, scraping, grasping kind of a Scrooge - a clutching, covetous old sinner..."

Using only Charles Dickens' extraordinary words and an ensemble of eight actors, Neil Bartlett's A Christmas Carol is a bold and theatrical re-imagining of the classic Christmas story

This stage version played to full houses and critical acclaim at both the Lyric Hammersmith, London, and the Citizens' Theatre, Glasgow

CAST
50 Roles - can be played by 8 actors doubling

'Gets right to the frozen heart of Dickens' classic Christmas tale ... one of those rare festive offerings for which no adult will need the excuse of a child in tow...' ~ The Guardian

"Bartlett's singular achievement is that he has relied entirely upon the words employed in Dickens' original novel in fashioning his most stage-worthy, theatrically compelling play. The result is a brisk, clear and unfussy Carol that is faithful to its source and likely to win over those constitutionally resistant to its inherent sentiment" ~ talkinbroadway.com

SEE OTHER ADAPTATIONS :
A Christmas Carol