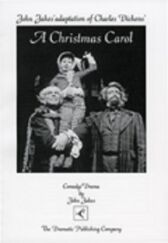 At the opening curtain, Charles Dickens himself is introduced to the audience, ready to present one of the famed platform readings of his stories that packed auditoriums in Europe and America

Of course, the story chosen is one which he often performed, A Christmas Carol (Dickens' marked-up script still exists!)

The story unfolds behind him, and soon Dickens is weaving in and out of the action, observing, performing small roles, interpolating short passages of rich narrative never heard in other versions

He handles props and helps Scrooge and others with costume changes. Originally conceived for Mr Jakes' home stage, the Hilton Head Playhouse, the play is supremely flexible in cast and design

The piece includes "God Bless Us Every One," a lovely new carol by Jakes and Tony-nominated composer Mel Marvin, as well as suggestions for placement of incidental music

Jim Volz, former managing director of the Alabama Shakespeare Festival where the play received its professional premiere, says of it: "In John Jakes' hands, A Christmas Carol recaptures the magic and mystique of the Dickens original. It is a brilliant script"