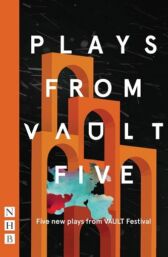 This fifth anthology in the VAULT series offers five of the best plays from VAULT Festival 2020, London's biggest and most exciting arts festival

Naomi is trying to mend her broken heart

But will tackling grief and racism in a place she calls home prove to be the final betrayal?

The heartbreaking and hilarious true story of Rosa's ovarian cancer

This award-winning Edinburgh smash follows the real-life story of Pam, a woman struggling to move her mother into a care home that's closer to her

An astonishing, tragic and uplifting verbatim play about the care system

A poignant exploration of fallen idols, family secrets and the human price of forgiveness

Set across two timelines, it tells the tense and sensitive story of a family torn apart by an unforgivable act