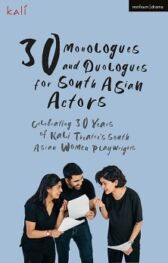 Published to celebrate the 30th anniversary year of Kali Theatre this is a brand new book of 30 monologues and duologues spoken by South Asian characters to be performed by actors from a South Asian/dual heritage background in auditions, workshops and acting classes

Drawn from, or adapted from the rich collection of full-length plays by women writers of South Asian descent that Kali Theatre have developed and presented over the past 30 years, this collection is a celebratory, revolutionary and necessary addition for actors and performers

From writers such as Rukhsana Ahmad and Nessah Muthy to new writers commissioned as part of Kali's SOLOS series curated during lock-down, this anthology captures a mix of powerful and original work

This vital collection features a concise history of Kali Theatre's origins and a full list of the plays that Kali Theatre has publicly presented over the past 30 years, making it a celebratory offering from one of the UK's most inspiring theatre companies